Understanding all the different elements available to you with Oracle SOA Suite can be a little tricky to say the least as the often the building blocks available are shown in diagrams like:

They say a picture says a thousand words. But, those thousand words can omit some details.  Take this diagram for example, it only reflects the common elements in the main SOA server. But within the SOA license you also have Oracle Service Bus (OSB) and the Complex Event Processing (CEP) engine which run as separate servers.  Which means you’d see the following:

Oh, but hang on; we still haven’t got a representation of JMS, and Coherence.  JMS like CEP and OSB actually instantiates as a separate server as well.  So got a handle on everything now?  Well there is a little confusion still needing to be added to the mix.  The following diagram is commonly used showing interoperability with other products with separate licenses:

Taking the above diagram at face value, you could interpret things as actually you don’t have the CEP capability as it is the key part of the Oracle Event Driven Architecture Suite.

I have merged together the diagrams to show the bulk of all the SOA stack that comes into the main SOA license. As you can see …. 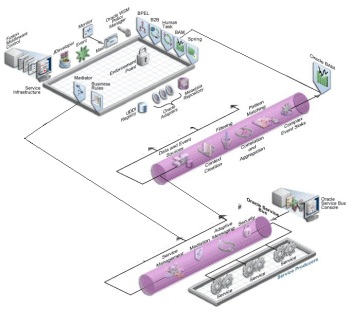