All things related to the meetup I help organize — https://www.meetup.com/Oracle-Developer-Meetup-London/

I’ve not posted about the developer meetups for a little while, perhaps because with everything being virtual these days things blur together too much. But its time to put that right (at least a little). So over the last couple of month’s we’ve been fortunate enough to have a couple of Oracle’s guru’s from the A-Team covering some pretty interesting topics. 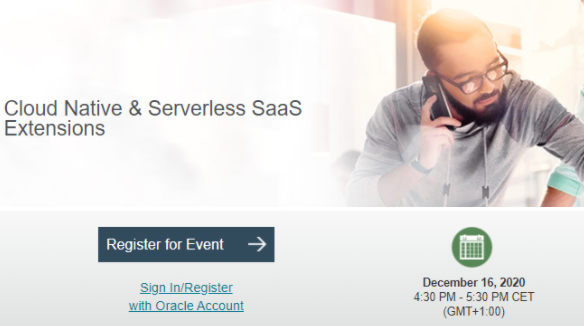 November saw Chris Peytier exploring the process management side of Integration Cloud and how process management and more traditional integration can come together to offer a very effective solution with example use cases such as the idea of when conditions are not valid for an integration to be executed Chris’ slides are here.

Then this week we had Angelo Santagata complete with Santa hat talking about Serverless as a means to enable SaaS extensions and integrations through the use of Oracle Functions (the cloud-deployed version of Project Fn). You can get the presentation here.

If the slides aren’t enough then you can catch the presentations as videos, Angelo’s is here and I’m sure we’ll see Chris’ made available as well.

I’m excited to say that we have a coyuple of presentations lined up for 2021 already so keep an eye on the London Oracle Developer Meetup. So watch out for the updates in the new year.

END_OF_DOCUMENT_TOKEN_TO_BE_REPLACED

Earlier this month as part of the Virtual Oracle Developer Meetups, we were very fortunate to have Oracle Ace, Martien van den Akker present on the subject of the magic of correlations in SOA, BPM, and Oracle Integration Cloud. Martien not only presents to the Oracle community but also is very active on the Oracle community sites (community.oracle.com and Cloud Customer Connect) sharing his wealth of knowledge. When it comes to the tough questions about Oracle middleware tech on these platforms, you stand a good chance that Martien will be the one answering your question.

This insightful presentation not only addressed the traditional Oracle Integration approach using SOA and BPM but also contrasted the capabilities as provided by Oracle Cloud. Martien was generous enough to allow us to record the presentation and share it (below), along with the demo resources from:

With the impact of Covid19 on the Meetup community really hitting, the Oracle Developer Meetups across Europe have got together and gone on-line. We’re several events in now, whilst Lucas Jellema (AMIS) and Rolando Carrasco (SPS) are leading the charge with a great series of sessions focusing Oracle Cloud Native services complete with practical labs.

Today was one of my sessions, whilst I only co-hosted, we got to hear a great presentation with a heart warming story which in this challenging times seems all the more appropriate. Christian McCabe (Steltix) and Filip Huysmans (Contribute) presented on how a multinational hackerthon spanning South Africa to Belgium was put together to only help children of Christel House (a charity who work to provide education to those who would not normally get access to it). Not only was the hackerthon engineered to given the students a chance to learn and experience software development in a pretty realistic context, it also provided the school with some software to help their everyday activities, in this case managing books in their library.

The hackerthon yielded a lot of successful outcomes (Steltix wrote about it here), but, what was really interesting is that whilst working with the school, children and interns (from both Steltix and Contribute) took a lot lessons away as well.

The Meetup recording can be found here.

Finally we should thank Geertjan Wielenga who facilitated and supported the development of the hackerthon.

If you want to know more about the virtual meetups then check our meetup page (https://www.meetup.com/Oracle-Developer-Meetup-London) for both virtual events, and when things change so we can all be a lot closer and be sharing pizza again.

Thanks to the Oracle and Cap Gemini teams including @GeertjanW and @PhilConsultant for an excellent session in London on Oracle Jet @OracleJET this evening. Very insightful. #oracledevelopermeetup

END_OF_DOCUMENT_TOKEN_TO_BE_REPLACED

Whilst the weather may have put some off venturing out, not for our intrepid duo of presenters – Joost Volker (Oracle PM for a Blockchain) and Robert van Mölken Oracle Groundbreaker Ambassador and author of Blockchain Across a Oracle who both had to negotiate protesting farmers, traffic jams, flight delays (wrong kind of rain to land in London) and London’s rush hour traffic.

So, what was covered in the meet-up…

END_OF_DOCUMENT_TOKEN_TO_BE_REPLACED

Last night was the London Oracle Developer Meetup’s sessions around observability.  Andrei Cioaca with a focus on the use of OpenTracing as provided by Jaeger, in a standard Kubernetes deployment with Istio – realized with Oracle Kubernetes Engine (OKE).  This was followed by my session on another pillar using logging via FluentD. Also incorporated into standard Kubernetes, but also able to support traditional monolithic use cases.

Andrei provided a great overview of the 3 pillars and the strengths and weaknesses of the different pillars. With the basics covered Andrei then dove into the configuration and execution of Istio combined with Jaeger and the corresponding insights available.  including a look at the kinds of visual insights that Jaeger and Kiali provide.  Some probing conversations followed about the relationship to Spring Cloud Sleuth, Open Zipkin and the OpenTracing as a concept more generally.

Andrei’s presentation material can be found in his GitHub repository here.

My session followed a pizza break, as there was a delay in its arrival. With everybody having chatted over pizza about OpenTracing, we picked up on FluentD and the Logging aspect to Observability. FluentD, as an open-source project has been growing steadily, and actually baked into several Log Analytics products and services – as the above analytics from Google shows.

The presentation looked at the growing challenges of modern software in terms of making sense of logging.  We explored the capabilities of FluentD before drilling into real-world use cases and potential deployment models.

As you’ll see from the slides we ran a couple of demos. The configuration for the demos can be found at https://github.com/mp3monster/fluentd-demos along with an example payload.

The next meetup we have organized is around Blockchain, all the details can be found at https://www.meetup.com/Oracle-Developer-Meetup-London/events/264661742/.

This Meetup was put together quickly as it presented an opportunity to align with other events happening in the Oracle offices. Despite the relatively short notice we a turn out that really made great use of our speaker – Sid Joshi who walked through the Enterprise Level patterns supported by Oracle’s Integration Cloud (OIC) including a demo showing how PaaS4SaaS worked using Service Cloud and OIC making use of VBCS and integration (formerly ICS) parts of the API Platform.

As with all the meet-ups we allow the discussions to flow freely. So, the conversation probed different aspects of OIC. So with the follow up on Several Capgemini use cases of OIC that have won the team awards. 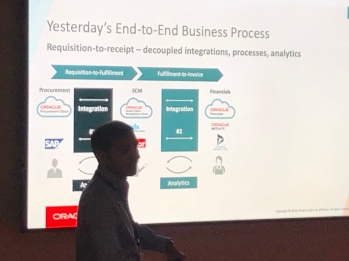 You can see these use cases here. Sid’s presentation is available AppIntegrationPatterns_MeetUp. Additional resources can also be obtained from https://oracle-integration.cloud

As the conversation has focused on OIC and the use cases rather than our ongoing Drones with APIs stories, I have had an interesting follow on discussion about the application of drones.  The drone story has many threads.  The initial driver for the work on the drone has been about bringing something interesting and distinctive to the meetup.  The drone is very tangible, and the source of amusement which makes the meetups a lot more fun.

END_OF_DOCUMENT_TOKEN_TO_BE_REPLACED

Want to join the Lisbon Oracle Developer Meetup? https://t.co/vVmq3zWjCg For Meetups across Europe please visit https://t.co/WyBwAjcsOF Thanks to @mp3monster to contribute the drone idea 😉 pic.twitter.com/D8jIWYrAK7

It’s been a quiet month for this blog, but I’ve been pretty busy with a raft of other activities…

Last night was the first Oracle Developer Meetup in London for 2019.  We were very fortunate to have Tomas Langer fly over to talk about the new micro container/framework being developed as an open-source solution by Oracle.

Tomas, opened by explaining the evolution of the micro-profile being championed by the Eclipse Foundation who are now the guardians of J2EE also known as Jakarta and how the J2EE and Micro-Profile standards compare (in simplistic terms – micro-profile is J2EE stripped back to be simple and support what is typically needed in a micro-service world).

The presentation then went onto compare Helidon SE and Helidon MP (micro-profile).  What was really pleasing is that with a couple of exceptions everything that Helidon MP can do, can be done in the SE edition, the difference being that for SE you have to implement more code, rather than the auto-magic of annotations, but in return you have a Reactive Java platform with a development paradigm which relates to JavaScript Express.

In addition to talking about what can be done, Tomas described the kinds of features being developed, this includes:

With the scene set, Tomas then worked through a series of live code scenarios starting with a clean slate and building Hello World in both the SE & MP models illustrating the differences in approach.  This was then built upon to add the following capabilities:

You can get the complete example which uses Helidon in both configurations from Tomas GitHub.

In addition to Helidon itself on GitHub, there are resources provided include rich documentation and examples of each key feature.  Plus a Slack community, that if you contact any of the Helidon team will get you invited allowing you to discuss with the development team how to do things along with other developers using Helidon.

Helidon itself can be found at:

I have previously blogged on Helidon at Exploring Helidon – Part 1

I work for Oracle, all opinions here are my own & do not necessarily reflect the views of Oracle