So I’ve been luxuriating in reading some books more for the pleasure of it (rather than technical stuff to help authors or the day job).  This book is about, record collectors, the act of record collecting and the general love for music both mainstream, obscure and just down right freaky. For the music fan this is Mills & Boon reading.  For those related or taken on the challenge of a partner who is a record collector an insight into the mind of your loved one.

The books tries to explain the passion of collecting from many different perspectives, through the eyes of collectors (some famous – like Peter Buck (of REM fame), Robert Crumb (cartoonist) and Thurston Moore (Sonic Youth), others not so famous but equally obsessed. From a psychologist point of view – clinical (relationship to low sertraline) to psychotherapy.  As a result we get discussions about the sensuality of vinyl and wonderful quotes like “CDs are like sex with a condom”.

We explore the kinds of collecting that go on – from types of records – old pre-war 78s, 1st issues of records, special prints like shaped coloured vinyl, those quickly taken out of circulation through to records that just seem to be rare and then the plain odd like albums commissioned by Listerine (the mouthwash) advocating the product’s wonders to people thinking they’re going to make it big putting out just tuneless oddities, to the child like contributions like Sammy Squirrel Teaches the Multiplication Tables (Which apparently has a publisher’s address on the cover of The Metaphysical Motivational institute, Drawer 400, Ruidoso, NM) and psychotic wonders such  as “Sit on My Face, Stevie Nicks” by the Rotters and Naughty Rock ‘n’ Roll by the P-Verts or maybe various artists on the Sugar Tits Label.

As the book progresses we get a chance to be taken on an exploration of the validity of the portrayal of collector/obsessive music fan portrayed in Nick Hornby’s book High Fidelity by the character Rob Gordon (portrayed by John Cusack in Stephen Frears‘ cinematic adaptation);  music collectors are geeky single men that can’t sustain a relationship etc.

The book is however 10 years old – and sadly doesn’t reflect how the rise in Mp3s has impacted.  As everything get ripped and becomes for ever available (legally or illegally) on the web, what is happening to the passion of the hunt for the mysterious, weird and rare?  Who knows, but its fun hearing the stories. 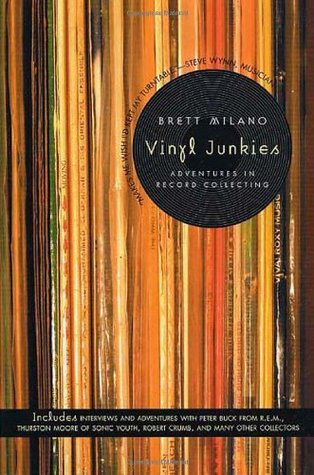