PERTH – An SAS trooper collecting toys for children was stabbed when he helped stop a suspected shoplifter in east Perth . The ‘Toys-R-Us’ Store Manager told ‘The West Australian’ that a man was seen on surveillance cameras last Friday putting a laptop under his jacket at the store.

When confronted, the man became irate, knocked down an employee, pulled a knife and ran toward the door. Outside were four SAS Troopers collecting toys for the “Toys For Tots” program. Smith said the Troopers stopped the man, but he stabbed one of them in the back. Fortunately the cut did not appear to be severe.

The suspect however was transported by ambulance to the Royal Perth Hospital with two broken arms, a broken leg, possible broken ribs, multiple contusions, and assorted lacerations including a broken nose and jaw … Injuries he apparently sustained when he tripped whilst trying to run away. One of the Troopers said, “He was a clumsy bastard.”

Although the book’s introduction says that its target audience is developers and architects the first few chapters are a very good introduction to the ideas and goals if Complex Event Processing (CEP) that would be easy to get to grips with by anyone in the IT industry, explaining the ideas and illustrating them with easy to grasp real examples.

As the chapters go on the book increasingly delves into the specifics of the Oracle solution providing illustrations of the different aspects of the product from Continuous Query Language (the heart of the CEP capability) to OSGi and how it can be used to effect easy deployment. That said, there is a lot here regarding general good practice, and provide insight into what should be expected from a good CEP platform.

Unlike a number of Packt books I’ve seen, this doesn’t simply take a step by step, screen by screen tutorial approach where you tend to get sucked into following the steps, the book focuses on what and why. This does mean that a bit more thought is needed to follow the examples through – but that is no bad thing in my opinion.

See posts below for a far more detailed write up on this excellent book.

This is the final chapter of the Getting Started with Oracle Event Processing 11g, and unlike e rest of the book looks forward as to where Event Processing might go (and therefore Oracle) as well as a few observations on the Oracle solution itself. The obvious potential for Oracle is to bring the CEP tooling into JDeveloper rather than an Eclipse plugin as is presently the case.big JDeveloper gets the suggested changes (the book has no apparent link to Oracle product road map) would result in a more wizard centric approach to development.

In terms of technology approaches the only other major point made is the likely harmonization with SOA principles. What did surprise me is that the link to BAM (Business Activity Monitoring) and BPM (Business Process Monitoring) wasn’t made despite the ever shrinking gap between business views onto data such that a business would be able to respond to to analysed events rather than BI reports well after the event. The most fascinating piece of this chapter is the relationship between CEP and Big Data (Hadoop etc) and the idea CEP could filter out data, or use Hadoop as a data source.

The rest of the chapter focuses more on possible directions for event processing in general, such as smart homes, cheaper devices feeding back more data allowing dynamic management and tracking of objects such as shipping containers and predictive analytics.

A well written chapter, but then by now you’d expect nothing less, but perhaps not as informative as the rest of the book, but then this chapter is far more speculative.

Overall Alexandre Alves, Robin J. Smith and Lloyd Williams should be very proud of the book and I hope that it sells well. As I said previously, this maybe geared to the Oracle product, but the way it has been written you could take the concepts and ideas and you could be confident of having some solid foundation understanding on any CEP solution.

The penultimate chapters don’t dive into the core Event Processing technology but look at some uses cases and the combination of CEP with Oracle’s spatial extensions and database capabilities. My initial reaction was that these chapters are perhaps more niche than I’d want, but when I thought a little longer it occurred to me that a lot of CEP use cases would include make use of spatial. Intact a system development I lead some years ago, if built today could be built using these features.

The book focuses on the idea of notifying people about a public transport service, but think about the great many mobile services evolving for smart phones given their push notification capability now you can see how e spatial features could offer a lot of value.

The chapters like everything else in this book are very well written, and worth reading.

If anything the questions left in my mind, are more commercial dimensions of such a technology – enterprise Oracle database which contains a number of the special feature is not cheap, and I’d imagine that the spatial cartridge isn’t cheap. This leads me to a natural next question, given the common application scenarios like e one described, has anyone stood up a SaaS service using this technology, and how cost effective/competitive/attractive would it be?

As you can see a thought provoking book.

The RecordStore have been using some marvellous old photos as part of their newsletters. I went looking for them so I could share them …

As it happens a lot of these photos show up at http://aziomedia.wordpress.com 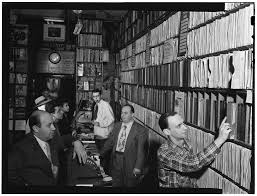 If only my collection looked as good as this.

Continuing to look at the Introduction to Oracle Event Processing book, by chapter 6 the books has covered the key principles and ideas for building a CEP solution, and we’re now need to consider deployment. But refreshingly the book also takes on a number of non functional requirement (NFR) areas such as the issue of monitoring, a subject area that many technical books tend to ignore. The attention to monitoring is admittedly driven by the fact that Event Processing is inherently sensitive to timing and system loading etc and will obviously have a direct impact on what outcomes are produced.

As the book takes you through aspects of building a simple solution – the CEP equivalent to writing ‘Hello World’ it would be great if the authors could make the implementation available for download, so you could go straight into deployment.

Chapter 7, then takes us into other performance improving aspects such as how to get event enrichment data, and importantly exploit caching to drive the performance. If you’re familiar with Coherence then this aspect should be pretty easy to get to grips with, and the book actually focuses on the OEP aspects of the setup. If you don’t know Coherence, you’d do well to look at additional sources of information.

Chapter 9 is a natural evolution of 8 as further develops performance thinking with clustering and with it High Availability dimensions.

Before looking at High Availability (HA) and scaling the book drives back into more advanced scenarios with CQL by introducing Java into the syntax.

Continuing with the review of the Packt book Introduction to Oracle Event Processing (OEP) we find chapters 3,4 and 5 take a far more indepth dive into the product, what it can do and how to implement the features with examples of why you might want to use different features and capabilities.   Chapter 5 focuses specifically on the Complex Query Language (CQL) syntax which is a SQL based expression language for querying events and describing expressions with an obvious emphasis on time series data.

As the book isn’t a blow by blow, screen shoot by screen guide through creating an example application using OEP you are going to need to apply a bit of effort now in utilising the ideas and capabilities being explained here.

Chapter 2 of the Getting Started with Oracle Event Processing book is really two smaller chapters introducing the platform in terms of its history, building blocks and the challenges that have had to be solved in the creation of an event processing platform (such as managing the potential impact of the garbage collector when handling very high event rates).

Not many books go into the underlying details of how a product is created, but in doing so the authors have provided a lot insight into the art of the possible and avenues for developing further understanding.

The second half of the chapter walks through the use of a demo scenario. Rather than providing details from standard Oracle manuals in a click by click type of guide, the book uses the example to show a flavour of breadth and depth of the tool.

This chapter doesn’t try to describe the installation process, but points you to the Oracle documentation and explains what it should guide you through.

Even if you don’t intend to exercise the demo, it is well worth reading the chapter to understand the construction and breadth of the tool. Based on what has been shown here, I believe some of the Oracle products such as AIA tooling could learn from it.

It’s great having a little blogging and tweeting apps on a phone as it gives a great opportunities to exploit those odd moments to capture and idea and post them.

The tools can use predictive text and correct your keying and spelling errors. Bit why can’t they help by suggesting/predicting links for you???? Trying to jump in and out of editing on an iPhone to grab links is just a pain!

I inevitably end up fixing blog entries from a desktop sooner or later to add appropriate links etc.

Over to you app authors time to impress.

In the process of reading Susan Cain’s book Quiet I got to wondering about common traits of developers and the idea of pair programming.

Pair programming advocates the idea of 2 developers working on a single piece of code will produce better quality code with a lower big count on the basis that both developers catch each others mistakes and both will gravitate to the best ideas. To achieve this does need the subjection of egos.

Now, if the stereotype of developers being typically introverted individuals which I think holds water (certainly from my experience) then drawing from what Susan Cain has written about this development approach is going to be fatiguing and not sit easily with the personality of your average developer.

This would mean for pair programming to be effective then those involved must. Be able to bring Free Traits to bare (more in a moment). But those best able to bring such practices to effect must be truly motivated developers. Ironically I believe that those highly motivated and focused developers are the best out there. So how does this pact the value of such an. Approach?

As for Free Trait Theory this takes the view that when pursuing core values individuals can project (if not manifest) traits such as extroverted behaviour, albeit find it fatiguing.

All of this says to me is, don’t expect developers to live and breath the idea of pairing; and even expect reluctance (on the basis that not all developers see. Coding or the value of coding as a personal goal in life). But bursts of this approach may deliver value when working on a more challenging area of code or algorithm.