The Oracle API Platform takes a different licensing model to many platforms, rather than on CPU it works by the use of Logical Gateways and blocks of 25 million successful API calls per month. This means you can have as many actual gateway nodes as you like within a logical group to ensure resilience as you like, essentially how widely you deploy the gateways is more of a maintenance consideration (i.e. more nodes means more gateways to take through a maintenance process from the OS through to the gateway itself).

In our book (here) we described the use of logical gateways (groups of gateway nodes operating together) based on the classic development model, which provides a solid foundation and can leverage the gateway based routing policy very effectively.

But, things get a little trickier if you move into the cloud and elect to distribute the back end services geographically rather than perhaps have a single global instance for the back-end implementation and leverage technologies such as Content Delivery Networks to cache data at the cloud edge and their rapid routing capabilities to offset performance factors.

Some of the typical reasons for geographically distributing solutions are …

The challenge that comes, is that the regional routing which may be resolved on the Internet side of things through Geo Routing such as the facilities provided by AWS Route53 and Oracle’s Dyn DNS as a result finding nearest local gateway. However Geo DNS may not be achievable internally (certainly not for AWS), as a result, routing to the nearest local back-end needs to be handled by the gateway. Gateway based routing can solve the problem based on logical gateways – so if we logically group gateways regionally then that works. But, this then conflicts with the use of gateway based routing for separation of Development, Test etc.

So, what are the options? Here are a few …

This problem can be further exacerbated, if you consider many larger organisations are likely to end up with different cloud vendors in the same part of the world, for example, AWS and Azure, or Oracle and Google. So continuing the segmentation can become an expensive challenge as the following view helps show:

It is possible to contract things slightly by only have development and test cloud services where ever your core development centre is based. Note that in the previous and next diagrams we’ve removed the region/country-specific gateway drivers. 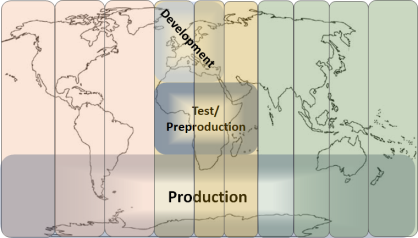 Or, and the point of this blog, use gateway based routing and leverage some intelligent DNS naming and how the API Platform works with a little bit of Groovy or a custom Java policy.

Let’s start with the DNS aspect, as this is what we want to leverage. If you establish the back-end implementations with a consistent naming convention, for example <environment e.g. dev | test | prod>.<region name>.myServices.myDomain.com/entity/ so if you’re using AWS Ireland or Oracle’s Phoenix region then for a Development gateway the DNS would be dev.eu-west-1.myServices.myDomain.com/entity/

Assuming the consistent DNS addressing is applied to the back-end API implementation deployments then it is possible to formulate an algorithm to tweak the gateway based addressing to be region-specific. But we’ll come back to that in a moment.

The last pay off of using a good DNS naming convention, is that if you deploy servers with Terraform, Cloud Formation, Oracle’s Cloud Stack Manager, or the equivalent feature you can build on the naming to provide each server with a meaningful system-level environmental variable which could be to take the DNS address (after all in the script you’ll have worked this out) and add an incrementing number or server logical role e.g. 001.dev.eu-west-1.myService.myDomain.com and use this  for hostnames. Whilst it may appear a little clunky it is helpful operationally as now in an operational context if you need to confirm which server I’m currently connected to, by just using hostname command will give all the information necessary i.e. whether its a production machine, what job the server performs etc.

To help our policy logical, that we’ll see in a moment we need to about our server’s identity using the DNS/server naming.  Given that we’ve just highlighted the value of using the naming to set the hostname, why not just use that to get the information?  Well, this all comes down to security privileges for Java and the signing of the gateway jars. If you try to run a Groovy policy that calls System.getHostname() there is a strong chance it will fail because of environment security. Whilst it is possible to alter permissions or add your own jar signing to the gateway it is a fair bit of extra effort and would be invasive of the gateway deployment. Typically host security is more forgiving of environment variable access as this is a common approach to configuring apps, and you need to know the environment variable name.  If we have a script to set the hostname, it isn’t difficult to also create a system-wide environmental variable that can be accessed by Groovy (remember the env var must have a scope that will mean it is seen by the shell session that runs the gateway, and the env var is configured before the gateway is started).

So let’s look at how the policies work. When an API call and reaches the Gateway, it is represented with an object that records the request and the response to provide along with constructs for the service (back-end). (again the book goes into more depth on this). But importantly the service is not invoked until all the policies are complete. This means we can configure the gateway based routing to have destinations such as

// set an HTTP header value so we can see the region retrieved from the environment – this is purely for making traceability easier
context.getServiceRequest().setHeader(“region”, region)

// determine if we’re sure this isn’t a on-prem server – with on-prem we’re probably working with a single location
if (!region.toLowerCase().contains(“on-prem”)) {

This Groovy Policy will result in modifying the Gateways record of the address to call for the back-end once all the policies have been processed.

So what will happen if I resolve the back-end address to something that doesn’t exist?  This is the kind of scenario where the back-end implementation does not exist or perhaps even should not exist.  This case is actually very simple, the Gateway will fail to call the back-end and return a service unavailable error.  The same behaviour you would expect to see if the back-end system wasn’t alive. So this doesn’t give away anything about how the environment implementing the back-end service.

Should the mechanism be implemented as a Groovy Policy or Custom Java Policy?  There are two factors to consider here, specifically: