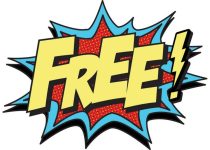 The news about Oracle offering some free cloud services ‘for life’ is making an impact.  But, the free services don’t end there. The pricing of some other native cloud services includes some free bands. So it’s worth keeping an eye on the fine print. I wouldn’t be surprised if we see limited capacity access in other areas.

Oracle Functions – whilst the core of this service is built on the open-source Fn Project (also largely driven by Oracle) the managed service has a free tier allowing up to 2 million invocations that can consume 400, 000 gigabytes of memory per second use (details can be seen here). Plenty enough to experiment with the concepts behind Serverless aka FaaS capabilities.

Oracle Notifications whilst focussed on the technical side of gathering key event data from OCI and its services, as the document states “sending notifications to numerous interested parties, or even synchronizing the moving parts of a distributed application” – this obviously means a service with characteristics a bit like AWS’ SNS. Like SNS it can be hooked up to email and other HTTPS services using Oracle Events which also has free use. Events is particularly interesting as it is bases the event structure on the CNCF CloudEvents spec. There is an excellent illustration of such a use case in the Oracle blogs here.

It will be interesting to see if we a similar trend with other Oracle cloud-native services. A new take on the now-defunct Application Container Cloud Service (ACCS) would be an ideal vehicle – whether there is sufficient demand for such a capability is not clear (it would in effect be an always live service like a Kubernetes solution, but the simpler, smaller footprint more like Functions in a multi-tenant environment. At the same time, it doesn’t have potential latency of a Function being activated).

This is my blog post as part of the Oracle Ground Breakers Appreciation Day (more about this with oracle-base) isn’t about a specific product or feature but an approach or possibly two approaches that exist with many of the PaaS services available from Oracle.

One of the key things that many of Oracle’s products such as Integration Cloud, API Platform and the foundation of Functions (Fn) and Containers is the recognition that many organisations are not so fortunate to be cloud-born, or even working with a cloud-native model for IT. For those organisations who would rather have across location unifying approach, Oracle cloud is not a closed capability like AWS, whilst products like Integration Cloud are at their best on Oracle Cloud Infrastructure, they can be executed in your data centre, or even another cloud.

Whilst the teams I work with experiment and build our service offerings ‘on Oracle’, when we engage with customers to help them with their specific problem spaces, we are more often than not operating in a multi-cloud or on-premises hybrid model.

This hybrid story is helped with a renewed vigour for open source both contributing to but also leading the development of open source. In addition to providing free tiers to some of their stack such as Functions, IaaS and Database (here). Many do forget the Oracle JVM is free as long as you keep up to date, you have got a small footprint Oracle database for free (XE), MySQL is part of the Oracle family. Then many of the modern development technologies are true to the core open-source, Blockchain, Container Engine meaning that the solutions on these layers are portable, can be run on-prem. Yes, Oracle adds value by wrapping these cores with tooling and features that make easier rather than diverging with proprietary Ingress controllers for example.

The irony is that organisations that tend to be associated with a low cost or being faithful to open source goals actually can end up locking you in and appear to be moving away from the original open-source ideals. Consider RedHat, the champion for a lot of open source-based enablement have removed Kubernetes from the official RedHat downloads for their Linux in-favour of a single node license of OpenShift, to get Kubernetes of RHEL you have to go outside of the normal binary source channels (other challenges are documented here).

When I first wrote about Oracle Messaging Cloud we used a service called WebScript.io to make it easy to demonstrate the Message Push Listener. WebScript was essentially what we better know as a Serverless or Functions oriented offering (that is we wrote pieces of code and deployed them without any consideration servers etc). Well as I prepared my demos for Messaging Cloud for the UK Oracle User Group Tech 17 Conference I discovered that WebScript is being shutdown in December 2017.

In the light of this news, I needto provide an alternate implementation for my Message Push Listener demo Google’s Cloud Functions.  Before I go into the Google implementation I thought it worth sharing how I landed on Google’s offering.

The Google Cloud Functions is a new service that has been launched with an interesting future. I had hoped to try using project Fn (Oracle’s open source serverless offering) but the cloud offering is not yet publicly available – although you can run Fn on any platform today if you’re prepared to invest in setting up the environment (defeating the point of serverless). I know some of Oracle’s Developer Champions have had a preview so it cant be too far away now. I’m sure when we get a chance to access the new Cloud Native Service announced which will include Fn we will revisit it. Before settling on Google we looked at several other offerings in the serverless space. Whilst this is not an exhaustive analysis it should help give a sense of the challenges and ease of adoption. If you search today on Serverless you’ll most commonly come across Auth0’s WebTask.io, AWS Lambda and IBM OpenWhisk (based on Apache OpenWhisk).

I started with WebTask.io and it was very nearly a done deal, with a nice easy to work with Cloud Development Platform, integrated testing. Extensive support for Node.js and a number of standard frameworks to use with it such as Express available without doing anything.

Other languages are supported as well by WebTask.io. But as I’m trying to create a demo that warrants very little explanation of the Serverless platform we didn’t dig in to this area. Everything went swimmingly until I tried to setup external calls to my function. This became a headache as the security model whilst not overly complex (several ways to provide the REST call with authentication e.g. adding a key in the URI). The process of generating and associating the credentials was far from clear in the documentation.

I moved to look at AWS Lambda, this I just found horribly confusing to get started with. I have heard others saying that getting going isn’t straight forward. So I found myself giving up pretty quickly as the setting up wasn’t that clear. Whilst having used AWS with its IaaS capabilities which is both powerful, flexible and pretty easy to get to grips with if you understand basic ideas like virtual machines this didnt hold true fory Lambdas.

As for OpenWisk, we started to look at it, but getting a 404 error when trying to access the Editor following the IBM documentation didn’t inspire confidence. The was plenty of supoprting documentation which explains how OpenWhisk works. 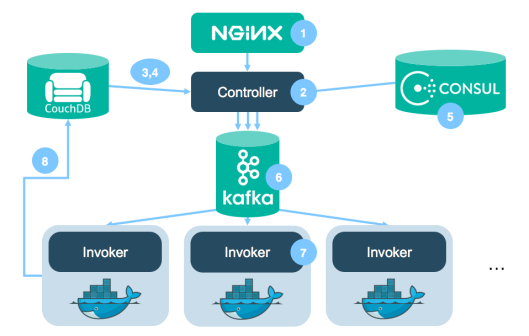 The Execution framework for OpenWhisk

In addition to the 404, as you can see we have a two step process to execute an action and return a respoinse. However the Message Push Listener initial challenge needs a call and response in a single step. So trying to massage this into a call and response is going to be challenging and a distraction from what we want to be conveying.

This brings us Back to Google, whilst the Cloud IDE is not as elegant or mature as WebTask it was sufficient and the security model wasn’t imposed. I liked the documentation when needed to refer back  to it, but to be honest it is pretty intuitive. You can’t fault the docs, to the point Google gave time over to explaining how to manage or avoid incurring costs.

Setting up, was very simple, and then once you’ve choosen your cloud services you get a dashboard like this: 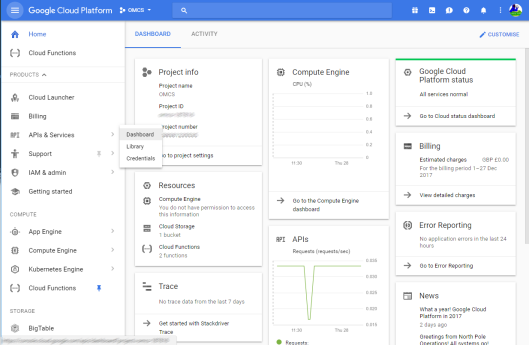 Google provides the idea of projects which allows you to group pieces together – such as related functions. Each project is name space separated. If we then navigate into a Functions project we get a view as follows:

As you can see in the preceeding diagram I created two functions within a project called OMCS. From here you can create more functions in your project or drill into an individual function, as the following view shows: 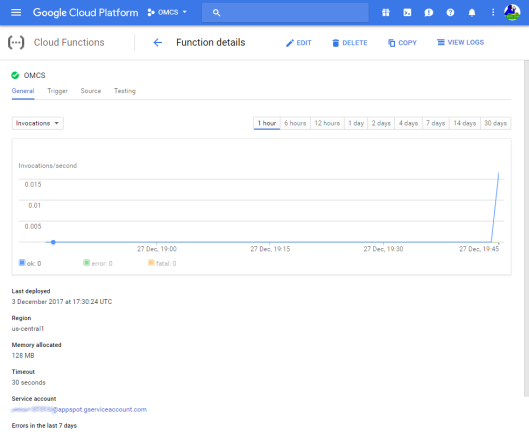 An individual function provides you with several tabbed views overing the Gernal information  (as shown above) or Trigger, Source and Testing. We can see the other views in the following screenshots. The following screen shot shows the Functions Editor, as you can see it is fairly simple – but sufficient to do the job. 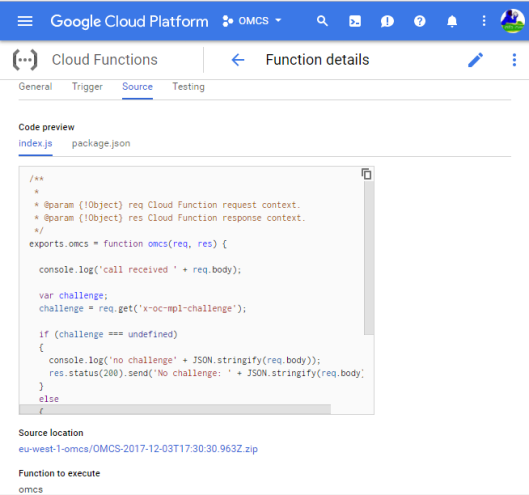 Once saved, if valid the code will automatically get deployed, or you can work offline and then upload the code if you want to use a nice editor like Sublime.

with your code edited and saved, then the next step is to invoke it. This can be done with the next tab, or the details such as the URI can be copied and you can test from your preferred test tool such as SOAPUI, Postman and APIFortress.

The testing view allows you 5o define input and output values, along with the outcomes. Personally I worked with SOAPUI. 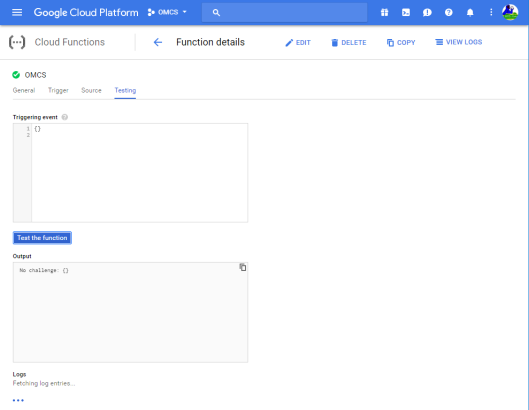 The important thing with running tests or diagnosing issues, is to be able to examine execution logs. In this area Google Functions is pretty feature rich with a solution that works in a style somewhat like the searching in Splunk (and I’m sure other log analytics tools) where you can drill into the logs and build log filters on the fly. The log view is shown in the next screenshot.

as you can see tool looks pretty straight forward and uncomplicated to use, with freedom to adapt how you work to your preferred style. Based on my experience of using Project FN on my desktop – it is this simplicity I think we’ll see with the Cloud Native Platform from Oracle when it becomes available.

Finally, let’s take a look at the code in Google Functions code produced for this example: 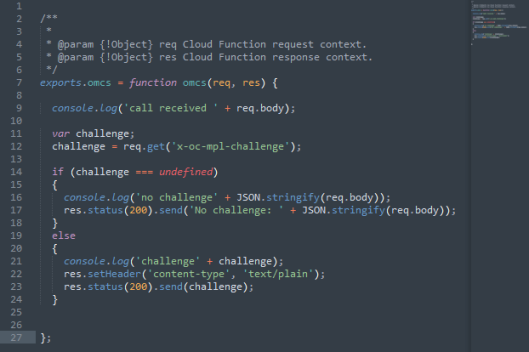 Google Code whilst its UI is a bit basic, it is easy to use and get started, certainly for using as a demo platform or perhaps for creating stubs, test and mock end points. Having been critical of the other offerings for security and it getting in the way of a simple illustration it is possible that the Google Functions may need some work in this area. I didn’t see anything that obviously integrated security features in easily.

Back to my Orginal Articles…

Just to tie back the impacted articles … 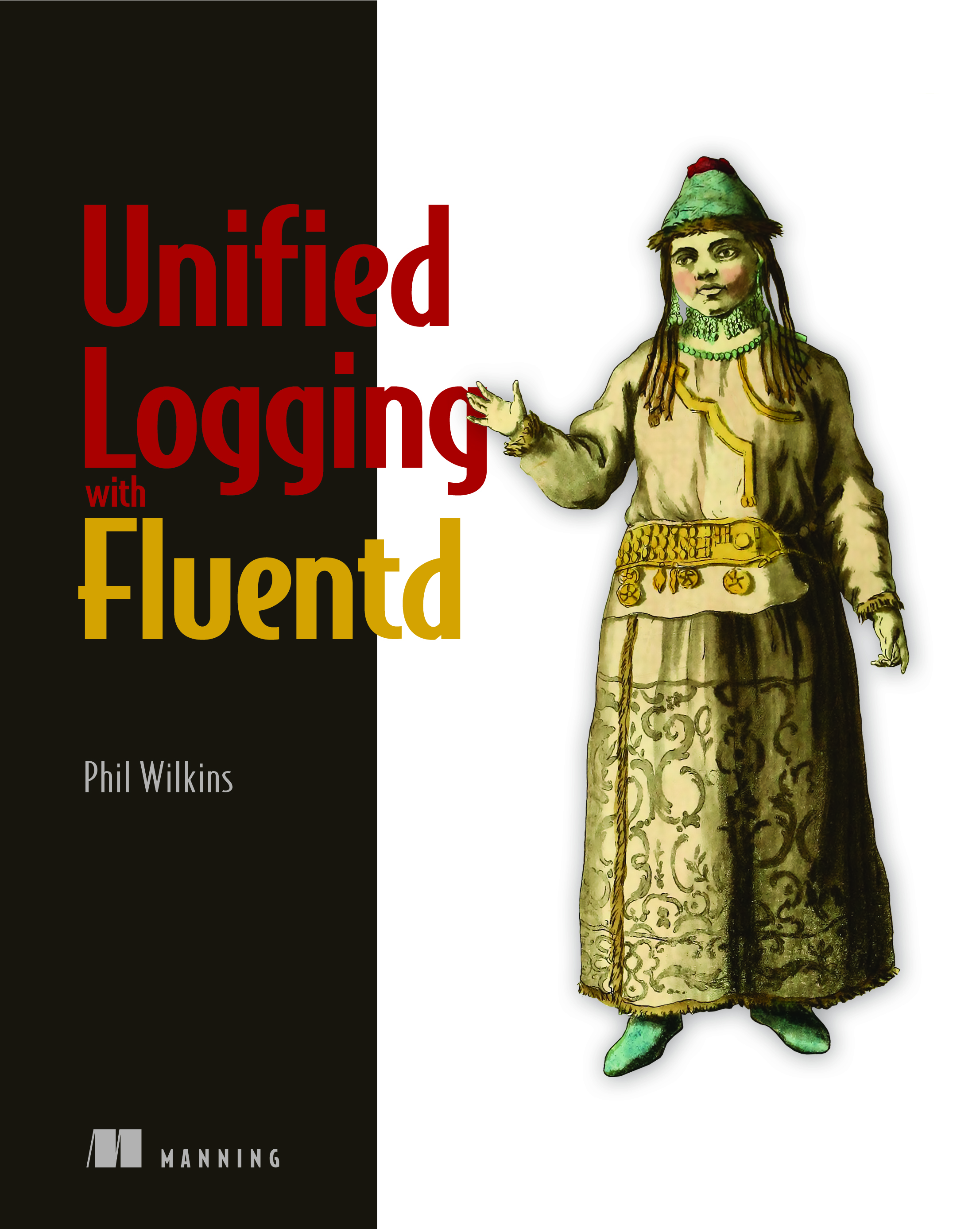